THE ABILITY TO MAKE A DIFFERENCE

Almost everyday I catch myself trying to “measure my success” in some form. Whether it is trying to match or best a PR lift, comparing my conditioning pieces with my teammates or other athletes, or correcting technical mistakes in movements that need to be precisely efficient – I “measure success” numerous times a day.  Although all that stuff is all well and good, and it feels amazing when I realize I gain some small successes daily, I have recently been reflecting more on what success actually means to me in my life. Due to the nature of my job I am in close contact with so many different people on a daily basis. This is one of my favorite aspects of what I do. I love being able to make a difference in people’s lives. This week – while one of my clients was overhead squatting a PVC pipe – it hit me. The biggest success I could ever measure in my life, is my ability to make a difference in the life of someone else.  Don’t get me wrong, my personal exercise successes are very important to me. But there is no better feeling of success than looking at someone and knowing you have made a difference in their lives. The following 3 examples are some of my greatest “successes” – because I don’t want to make this post 10 pages long, I am limiting it to 3. However, the list can go on and on.

The first is one of my clients at Equinox. He is in his late 60s and was a former collegiate basketball player, active all his life. In good health, aside from some aches and pains that come from being active. When I first got a hold of him he was exercising regularly and was excited about it. However I realized quickly that he was often uncomfortable and in pain because he had some issues that needed to be addressed. He was severely inflexible in both his thoracic spine and hips.  One of my favorite measures of flexibility for both of these areas is the overhead squat. His OHS had became my little project. I knew if I could correct his OHS, that would mean that his underlying issues would be corrected as well – making his movement patterns, and life, easier and more comfortable.  I’ve been training him almost a year now. A year of implementing many repetitive, boring, yet very essential drills and exercises into his weekly program.  Month by month, I’ve watched him get more mobile, and be able to get stronger because he was getting more mobile. He’s completed a mini triathlon in this year, has regained confidence in his ability to move comfortably, has explained how much better he feels while being recreationally active in areas like shooting a basketball and swimming laps. One of my biggest lightbulb moments with him was when he explained to me one day “It was raining last night, and the dumpster to my house is about 40 yards away. I had to throw three bags of garbage out and without hesitation I threw my coat on, grabbed the bags, jogged to the dumpster, discarded them, and then jogged back. Only when I got back inside did I realize how awesome it felt to be able to do that.” The funny thing is that only after that statement did I realize the difference I was making in his life. Oh, and this week, for the first time in the year we have been working together – his OHS looked like this.

The second success was completely a team effort. This man is a member at the CrossFit gym that I coach at. He came into the first day of “foundations” which is our introductory classes and – no exaggeration – could not do a sit-up. He was incredibly overweight and out of shape and was almost in shock that he let himself get that way. In fact the only way to get him to perform a sit-up was for me to  keep a 45lb plate on his feet while he attempted one. However, he bought into what we were doing 100% – from the day he walked in. He came religiously, and started to eat the way we were encouraging him too.  In his first month in the gym, he had lost 30lbs. I’m not sure if you have ever done a workout with a weight vest on? But 30lbs is ALOT of extra weight to be moving around. Currently, he has lost close to 80lbs. He can do sit-ups with ease, he can do pull-ups, running and box jumps are no problem for him. I was there this weekend as he competed in a small local CrossFit competition alongside his college-aged daughter who also has a similar story to his.  This man is special, and when I watch him I know his success has little to do with me and everything to do with himself. However, there is that old saying “you can lead a horse to water but you can’t force them to drink”.  That saying directly applies to this situation for me. I understand that I have the ability to lead my horses to water – to show them a better life for themselves when they are unsure if it is possible. I am proud to watch him in the gym everyday with a smile on his face because I know it represents a greater, new-found happiness in his life and in himself. He feels great about himself and in turn has caused me to feel successful to have the ability to make a difference in his life.

My third “success” is probably my biggest, constant, work in progress.  When I first started training this woman she was literally the weakest person I have ever trained. We started with half hour sessions because she could not physically take an hour. The interesting thing was this woman was a busy, strong, mother of two. One of the children, a 4 year old on the Asbergers/autism spectrum, requires 100% of her effort and attention. She is one of the most amazing mothers I have been in contact with – spending countless hours making sure her son gets the help and assistance he needs at this crucial time in his development. When we first started training together she was wildly distracted, would get nervous to exercise, would present soreness and pain very easily because of her lack of strength, and just didn’t feel good about herself in general.  She would cancel very often and had a clear anxiety about being in the gym, because she had so much going on in her life. It was hard for her to put everything on hold to spend time on herself.  In a matter of about a year I have seen a massive change in her. We still have a long way to go but she is actually at the point where she enjoys exercising, she has gotten stronger both physically and mentally because of it. On numerous occasions she has expressed how she can now handle all the stresses in her life because of her ability to release stress in the gym. She feels her life is easier simply because she is on an exercise schedule which provides a little bit of “me time” for her each week.  She now realizes the importance and necessity of taking care of yourself before you can ever take care of others.  She is in no way spectacularly fit or strong, however I look at her as one of my biggest measures of success because of the progress she has had. I know the difference that exercise has made in her life and when I look at her, I am constantly reminded of my ability to make some kind of a difference in the lives of others.

Exercise Update:
I am two weeks out of the American Open and could not be more excited. My training has been still following a CrossFit style template, however as usual, there has been some extra weightlifting thrown in there to keep me moving well before the AO. I am spending some time at my coaches gym this week getting some last minute fixes and adjustments in before the big meet. I found out last week that it seems I will compete in the A session as a 63k lifter meaning I will lift on Sunday on the single platform (this was the goal all along). I PR’d my clean and jerk this past week as well as hit 90% of my max snatch twice – two things I feel real good about weeks out from the biggest weightlifting meet of my life. I’m stoked and ready. This is the first big showing of my rookie year as an exerciser. 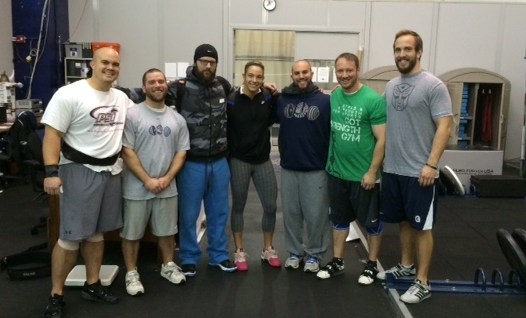 Oh, coach and I were able to get some snatching in with the boys from the Georgetown Strength & Conditioning staff this week. They were awesome and it was a ton of fun. Hopefully I will be hanging around, coaching and lifting with them more often. 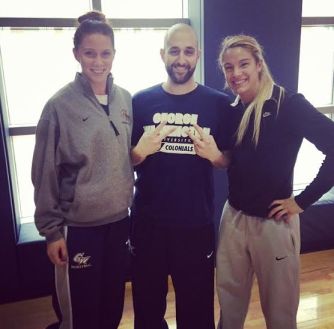 My second stop in two days on my DC college tour was to hang with one of my all time favorite coaches and greatest people out there – my former assistant coach at Hofstra, Bill Ferrara.  This is Megan Nipe (his current #22 lights out shooter), Bill throwing the deuces up, and I (his former #22 lights out shooter) all hanging after their practice.  Shout out to him for letting me post my blog on his office computer (apologies for the lateness of it!)

This entry was posted on November 22, 2013 by NicoleRoggow. It was filed under Uncategorized .