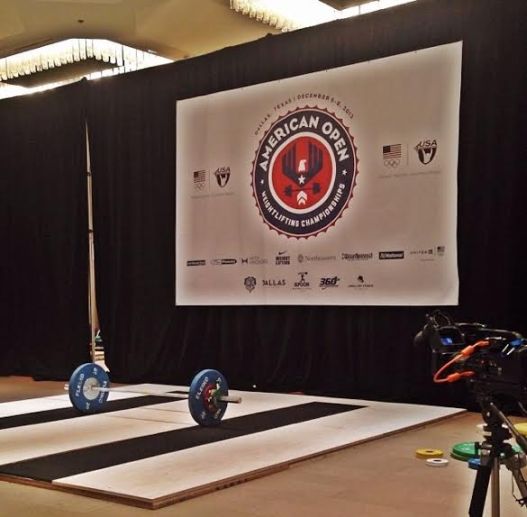 This past weekend was hands down the coolest sporting experience I have had since hanging up my basketball jersey. The 2013 American Open was a weekend filled with amazing, actually shocking athletes in a sport that was so incredibly different from what I am use to that it blew my mind. The idea that I was even a part of it and actually competed and held my own is still something that I am getting use to. I went into the weekend knowing it was going to be a great event, however I severely underestimated it. I am going to break this post into sections so I can talk about aspects of the weekend in some kind of order. My brain is still on overload trying to process it all that if I don’t do this, the post will be like a mishmosh of my thoughts.

1) Cutting Weight
This is an aspect of weightlifting that needs to be spoken about, especially if you have never had experience with a weight cutting sport (like me). When I qualified for the AO I did it from the 69kg (152lb) weight class. About 9 weeks prior to the AO we decided I would compete in the 63kg class (138lb). Since then I have been walking around at about 145lbs, so cutting to 138 was going to be just fine. Luckily, one of my coaches, Spencer Arnold, is one of the best weight lifters in the country and basically mirrors my weight cut exactly. So, he had been an amazing point of reference the entire time. I cut weight by basically eating a very strict paleo diet and drinking tons of water. About a week out I took out all carbs except for right around my workouts and I also took all my meals, split them in half, and put about 2 hours between meals. I didn’t eat after 7pm if I could help it. A home this is was no problem. However, I left for Dallas on Thursday and didn’t weigh in until 5pm on Saturday night. The discipline involved in this aspect of the sport is insane. I continued my strict regiment and also got on the scale religiously at the hotel to understand where my body was at constantly. I was basically a robot, following exactly what Spencer said to do. My biggest fear was getting on the scale and weighing above 63k and not even having a shot at lifting. Spencer was so good at coaching me on this that I actually was able to eat two full meals AND stay hydrated all day Saturday before getting on that scale. I weighed in officially at 62.2kg. Immediately after, I finished a bottle of Pedialyte, a plate of chicken fingers and fries, and two bags of M&Ms. I was feeling perfect and ready to go.

2) My Team
One of the coolest things about this weekend was that I went into a big time individual sport with some of the best people as my “teammates”. Many of them I have never met before, but it felt like we had been teammates for years. Although we were all alone out there on that platform when it was our time, the entire weekend I felt like I had a constant support system in exactly the same way I always felt on the road with my basketball teams. We all lifted at various times, and for the most part we were all there together watching and helping each other. The sense of pride that came from that was amazing and made such a positive impact on the weekend. Team Outlaw had an awesome showing at the AO and promises to have an even better future. 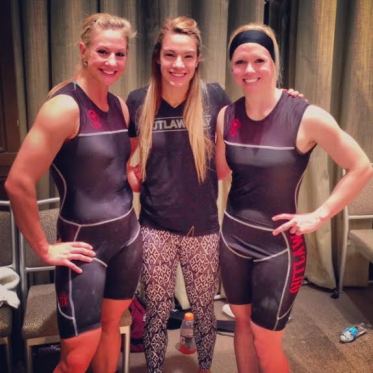 3) My Coaches
I can officially say, the coaches I have are among the best in the business. I have now witnessed them up against the best in the country and am so honored and grateful to be their athlete. As an athlete, I literally had to worry about NOTHNG else but performing. For 3 days, they did not stop. They handled all 15 of us, sometimes up to 3 of us at a time, with such ease that it was incredible. As a division 1 athlete, I understand what it is like to be “spoiled”, these guys duplicated that feeling. I was relaxed and confident, knowing that they had me prepared and I could trust what they were asking of me. Rudy Nielsen, Spencer Arnold, Colm O’Reily, and Jared Fleming are probably the biggest reason I had any success this weekend.

4) The Atmosphere
The entire weekend the atmosphere was unbelievable. The event kicked off on Friday morning with the youth division. One of my teammates, 13 year old Harrison Maurus, lifted in that session at 8am. Even at 8am on the first day, the atmosphere and energy was so cool. I lifted in the night session on Saturday. At this point there was two platforms running next to each other – 77kgA males on one and my 63kgA female session on the other. James Tatum, a crowd favorite and one of the best in the sport was lifting on one platform next to Geralee Vega, the overall winner in my weight class and competitor in the 2008 Olympics in Beijing. Needless to say, the atmosphere in the room was the most insane it had been all weekend. It was packed, standing room only. When I was on deck ready to lift I actually had lean in close to hear my coach standing right in front of me. Luckily, I love a crowd. The more people the better, the louder the noise the more I want to get out there, my smile gets bigger, I start having more fun. I told one of my coaches that competing in that atmosphere actually made me wish I was better at weightlifting. Unlike in basketball, where I had perfected the game, my technique and the understanding of the sport for years – I’m still just a weightlifting rookie with a lot of room for improvement in my technique and familiarity with the sport. Nonetheless, stepping up to the bar in front of that crowd was one of the coolest things I have ever done in sports. It gave me a new inspiration to keep perfecting my lifts and I cannot wait to get back there.

5) My Actual Lifts
I know this is the part that most of you are all waiting for. I finished my first ever national weightlifting meet in 16th among the 34 lifters in the 63kg weight class. My recorded total was 160kg (352lbs) which was 2kg short of a meet PR for me. I opened up my snatches at 68kg (149.6lbs) and hit it. I then jumped to 72kg (158.4lb) and missed. On my final snatch attempt I hit 73kg (160.6lbs), but received 3 red flags on my lift – my first “No Lift” ever. These were questionable red flags, my coaches and I are still unclear on the reasoning but it is what it is, bad calls happen and there is nothing we could do about it. So, my highest recorded snatch was 68kg. I then opened my clean and jerks at 92kg (202.4lbs) and successfully completed the lift. That was a meet PR. My next jump was to 96kg (211.2lbs). My coach and I have been working on a certain part of my clean technique that I need to adjust in order to become a better cleaner. I stepped up to 96kg and successfully made that technique change but was not ready to receive the bar where I did (because I have been use to doing it wrong for so long now) that the bar actually knocked me back on my butt – something that has never happened before. Although I wish I could have received the bar cleanly, I was confident in the pull and the technique change I had made. My original plan was to have my next attempt be at 98kg (215.6lbs), however, coach and I had spoke about the idea of attempting 100kg (220lbs) at the AO. We knew I could hit the lift, but everything would have to be near perfect. So we called 100kg. My coaches came back over to me a little bit later and told me that if we pushed to 101kg (222.2lbs) and hit it I would medal in the clean and jerk. Being the athlete I am, I’m never going to say ‘no’ to something like that. Honestly, I wouldn’t tell these guys no very often anyway – they’re great coaches. So I stepped out to the 101kg bar. I had already successfully made the lift in my head about 3 times. However, in real life my pull was off, I let the bar get away from me and could not secure myself underneath it. No lift. I ended my clean and jerk with a successful 92kg lift.

The Weekend Takeaway:
This weekend made me realize how blessed I really am. When I walked away from competitive basketball, I never imagined I would have the opportunity to continue be the athlete I always was – to travel around the world, to be a part of a great team, to have great coaches looking after me, to be competing in great atmospheres, to have something to work hard for everyday. Not a day goes by where I don’t thank God for bringing be to this and giving me another chance at doing the things I love to do.

This weekend also inspired me to want to be great even more. Being around such positive, hard working, driven and focused people made me realize there is an entire breed like me out there – a breed that I need to be around for both my continued success and mental well being. No matter how hard I think I am working daily, this weekend I saw there are hundreds of women working just as hard – and harder. That’s inspiring in itself – I don’t ever want to be out worked.

Lastly, this weekend reminded me that everything needs to be rooted in fun. The minute something starts becoming stressful, or a burden, or a negative experience, it needs to stop immediately. Sports is about fun, and recreation, easing your mind, and bettering your character. All the greats are out there just having fun, appreciating the moment and the opportunity they have worked so hard for, and simply living the dream.

If you don’t believe me about that, here is a little 2013AO, off-stage, behind the scenes, epicness. Yes, this is an exercise race at 3am in a hotel lobby. Yes, those are some of the biggest names in the sports of both weightlifting and crossfit. Yes, that is Paul Estrada winning a handstand race in space dolphin tights about 24 hours after easily snatching 146kg (321.2lbs). Crossfitters win.

This entry was posted on December 9, 2013 by NicoleRoggow. It was filed under Uncategorized .