OFTEN, ITS MORE THAN JUST EXERCISE 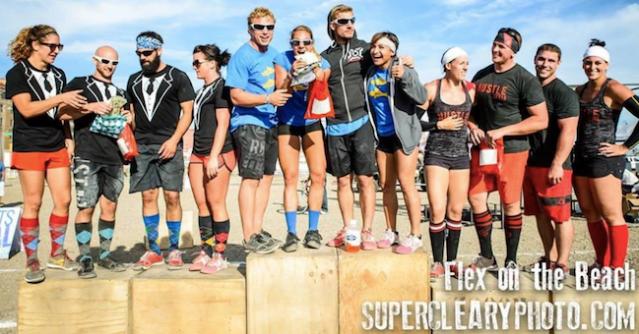 The first part of this post is going to have very little to do with me as a competitive exerciser, and more about the community of exercise that I coach everyday – the CrossFit community in particular.  I know it is very cliché at this point that CrossFit is so successful and awesome because it provides a “community atmosphere”.  The competitive part of me, the part that treats exercise like a sport where I want to viciously demolish everyone, cannot stand to hear that.  However, the part of me that is a real person, an exercise scientist, a personal trainer by profession, and someone who has experienced this amazing community in both my greatest victories and my lowest days cannot deny the fact that THE POWER OF COMMINUTY is stronger than anyone could ever imagine.  If this idea intrigues you, here is an amazing book on the subject – some incredible stories and people are between these covers.

This past weekend I competed in a 4 person-COED competition called Flex on the Beach in Long Beach, NY.  One of the best run events, and most amazing atmospheres I have competed in to date.  We were literally ON THE BEACH, like a few feet from the amazing Atlantic (see pictures).  I was teamed up with my boyfriend, and our two good friends (Coach) Dan Tyminski and the pretty Ricklynn Long.  We won, and had an awesome time.  We have dubbed ourselves the “cohesive unit” and I absolutely love traveling around and exercising with them.  But standing atop the podium was definitely not the best part of the day (weird right!).  The best part was that I got to see athletes that I coach every day compete for the first time.  There were three teams from the gym that I coach at, Cow Harbor CrossFit in East Northport, NY. Basically, for months I begged them to come compete and promised them it would not be that stressful and would be a ton of fun.  (It helped that the event offered a post competition pub-crawl included with registration fee) So after some convincing, the 12 of them decided to compete.  This was their first competition, but also a first for me. It was the first time I was coaching any of my athletes in a competition setting.  The first time in my short CrossFit life that I now got to experience what my coaches experience as far as strategizing, worrying, and going over and over things in my head that I want to tell them.

But after being there, and getting the event underway I realized it really was about more than how my athletes exercised that day (I, myself, am a different story — in my mind it was very much about how I exercised that day).  See, I really wanted them to do this event, because I knew it would grant them something way beyond competitive exercise.  I knew it would bring them closer together and expose them to the strong emotional bonding that happens at these little exercise events.  I knew it would allow them to appreciate their time in the gym everyday, and the people they spend it with even more and motivate them to trust in CrossFit and want to get better everyday.

Once the soreness from competition day and the pub-crawl from that night wore off, my athletes were back in the gym working hard this week.  They are excited, motivated, experienced, and closer than ever.  They have bonded as a group because they now understand each other on a different level.  If you are a CrossFitter and cannot understand this, I suggest you find a local competition and register to compete with a few of your buddies.  If you are not a CrossFitter, it is understandable why this may not make total sense to you – and to that I say try the cult out.  Age, race, gender, religion and any other social grouping gets thrown out the window when shit gets tough – and as a human the most amazing feeling is fighting a battle with other humans on your side.  I will go more into this in a future post.

For those of you interested in the actual exercise portion of the weekend, here were the workouts and my team’s results on each one.

(every teammate performs the whole workout, you cannot move to the next piece until the teammate in front of you is off of that piece)

**next two workouts done in the sand** 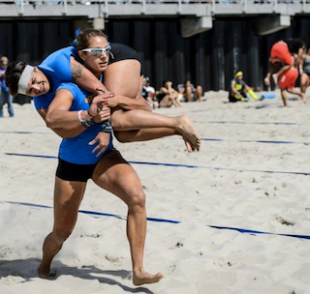 (Probably the silliest workout I’ve ever done in a competition but it made for some good laughs and heavy breathing – any kind of sand sprints are hard!)

Each team was given one 5 gallon bucket and three very small buckets.  There was a garbage pail about 30 yards away.  FILL THE PAIL WITH SAND AS FAST AS YOU COULD. Every athlete can only have their hands on one bucket at a time. 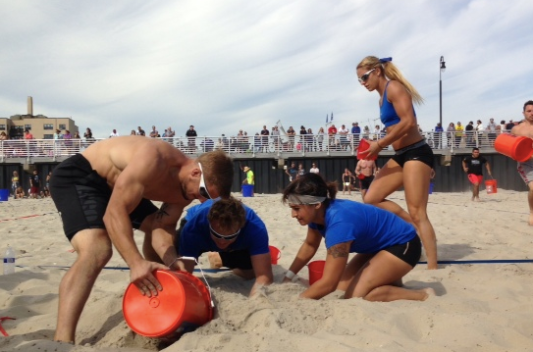 Then, broken up however you would like amongst the team 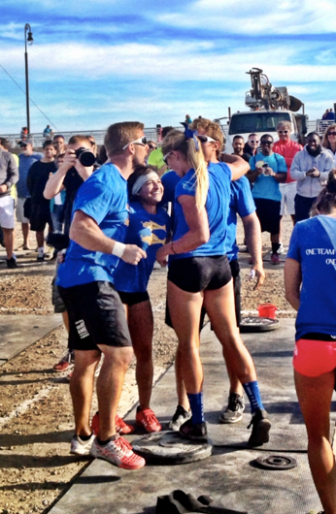 This is my favorite picture from the weekend.  It was after we won the final workout.

In other news, I am 4 days out of my American Open qualifier and first weightlifting meet EVER.  I am stoked, a little anxious I guess – but really more just excited at the opportunity I have in front of me.  I took Monday as a rest day after my competition.  I’ve also taken my foot off the gas slightly this week, but have still hit some sweet bar complexes at my opening weights for this weekend.  So I’m pretty game day confident.  Because I am still an exerciser first, I have kept up with my met-cons, however have dropped some of the weights and reps where appropriate in preparation for Sunday.  I’m pumped and so thankful for the coaches I have helping me through this.  Hopefully next week I will have some awesome news for you all.

This entry was posted on September 19, 2013 by NicoleRoggow. It was filed under Uncategorized and was tagged with blue barracudas, crossfit, long beach, weightlifting.